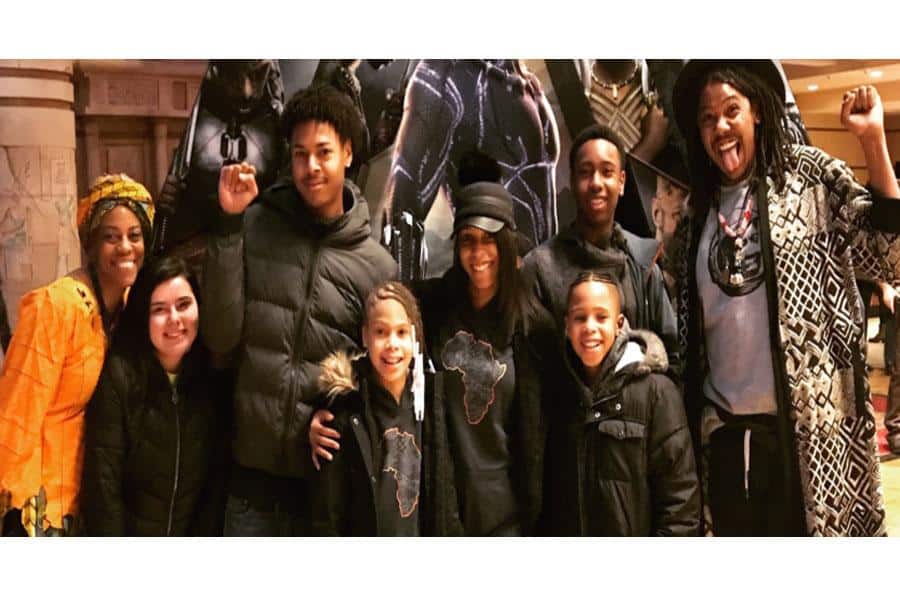 Last year, my son Tres, who lives in Brooklyn and is a social activist and musician decided that we absolutely needed to find out where we were from. For Christmas, he gave our family the gift of ancestry DNA testing.

When the results came in a few weeks ago, he wanted to make an announcement to the whole family at once. Since it’s not easy getting all of us together in one place, we decided that we’d do it right after we’d all gone to see Black Panther. So that night, we got to take one journey in the theater, to the fictional African country of Wakanda, and another one afterward, as we shared with our family the actual places in Africa (and elsewhere) our ancestors came from.

Tres is a brilliant thinker—I know, I’m biased!—so I decided I’d interview him about why it was so important for him to trace our ancestry and how he felt about our family’s results.

Verna: We’d been talking about doing our family’s ancestry for years, but this was the year you actually pulled the trigger. What prompted the decision?

Tres: It was actually discussions with my partner, Tanya, about my art practice and a new music project I was launching call Freeborn, which focused on bringing together elements from both my African heritage and African American culture. I knew that for it to really feel authentic it would be helpful for me as an American Black person to know what cultures my lineage was from.

V: I’m so glad your music drove you to get our family to explore our African lineage. And timing is everything because both sets of your grandparents are alive, which is really quite awesome and special.

T: I didn’t really recognize how lucky I was until about five years ago. Then it dawned on me how amazing it was to have people so close to me that have had such different experiences than I have—it’s like they’re from a different world. And hearing about their childhoods and histories helps me learn not only more about where I come from, but contextualizes much of the history that I’ve learned about this place, America, where we all happen to be as a result of the transatlantic slave trade.

V: Is there any story you heard from your grandparents that stands out for you?

T: There are two: The first is the one about my maternal grandfather coming up north for the first time. He talks about what it was like to work in kitchens when he was a teenager and why he eventually joined the army. He talks about very limited options for black folks at the time, but also a tremendous amount of strength and perseverance.

The other one that stands out is my paternal grandfather’s story of his grandfather, a white immigrant from Germany, who married his grandmother. They had a farm in Alabama, but were run off their land by the Ku Klux Klan. They were, like many black people, refugees. Only recently are we starting to use rhetoric that actually is reflective of what it was like for black people during Reconstruction. In an instant, everything could be taken from you. Order was maintained by terrorism, and swaths of slaves left their homes in the south as refugees. My great-great grandmother was one of those slaves.

V: And if this is true about your great-great grandfather, then part of your ancestry should show up as German.

T: Yes, it should. We’ll find out for sure when my paternal grandparents get their results back.

V: But we have gotten the results back from my mom and dad. I was really excited during Christmas vacation when you, Tanya and I visited to do the test. I remember us handling the tube of their saliva almost like it was precious cargo. It took a little explaining and coaching. Dad, bless his heart, was definitely confused but cooperative. How was the experience for you?

T: It was definitely an event for me as well. It felt like we were searching for buried treasure. For me, the lack of ability to trace my family to before they came to the U.S. has felt like a missing piece within my timeline of world history. Only indigenous people are really from the Americas. The rest of us came or were forced to come here. So, for me it’s a clue to uncovering the traditions, customs and teachings from my people that predate the United States. It makes me feel like there is a vast past and future beyond the fiasco that is the U.S. in 2018.

And understanding pre-U.S. cultural heritage shouldn’t just be for black people, but for everyone! I find that the most grounded, confident, thoughtful, creative white people I’ve met actually have a strong sense of cultural heritage, which allows for the sense of an existence before and beyond our current American Project. And for the people of color I’ve met who are not black Americans, it’s doubly true.

V: How did you feel when you got the results? I was so excited when I saw the email that I opened it immediately—like I was opening a package under the Christmas Tree! I called you right away, screaming, “We’re Nigerian!” and we were screaming and giggling on the phone.

My dad was 36% Nigerian, 9% from Mali and 14 other regions, but the test also revealed that he had ancestors from Benin, Togo and several other West African countries. There was also 9% Great Britain and 7% European West. I had assumed that we were West African, so it wasn’t quite a surprise, but nevertheless I was elated. I know you were too. And then you went immediately and looked up my mom’s test.

T: Grandma’s test said Nigerian and also Ivory Coast / Ghana (27%) and other West African countries like the Benin Togo and Cameroon/Congo. I think I would have been proud no matter where it said, but Lagos is the biggest city in Africa, known for how rich the culture is and how brilliant the people, and I was like, “We’re from Nigeria, that is VERY cool!” I feel the same way about Ghana.

V: Of course both Mom and Dad had British and Western European heritage, but I don’t want to talk about that painful reality; let’s stick with the positive emotions, you know what I mean?

V: So, do you think it’s pride we are feeling?

T: Indeed! Major pride!! For me it’s also a sense of roots or placement or grounding. I mean, to know where you’re actually from is kind of basic—a thing many African Americans don’t have, and that many folks who do take for granted.

V: Exactly. I know that my African ancestors aren’t gods to be worshipped, but I imagine it’s like folks who have never met a parent, or were adopted and don’t know who their biological parents are. You’re fine in some ways not knowing, but it’s got to feel different to know for sure.

V: In fact, I am reading this novel, Homegoing, by Yaa Gyasi, a Ghanaian born, American-raised writer. She does a masterful job showing the intricate connections between Africans and African-Americans, tracing and linking characters from Africa to the U.S. during slavery, the pre- and post-civil war struggles and the great migration away from the south. She’s doing in writing what you’re trying to do with your music: To trace and weave together the people who greed, inhumanity and a huge ocean have separated.

I started the book before we got the ancestry results, but getting them changed my experience with the book, the characters, and the writer. Before, I had a certain distance, like you do when you’re reading a history that isn’t really yours. But after getting the results, I found myself thinking, “I am these people.” These are actually my relatives that I’m reading about! I kept wondering if I might even be related to the author, too. I’m wondering now if I am from the Asantes or Fantes or some other tribe. Different tribes had different customs and ways of being, so it opens up a new idea around identity. [Note: After Tres and I talked, I learned about Africanancestry.com which offers DNA testing to trace your specific African ethnicity, and I’m planning to do that next!]

I know so little about that other side of that hyphenated ethnicity, the “African” in “African-American.” We focus so much on race, but race was just something that people made up to designate non-white people as “less than.” Ethnicity and nationality, on the other hand, are real. It’s like a part was missing, and now we have it. It also feels more real to be from a country versus a whole continent. Until we got these results, it was just a hunch.

T: Yeah, a hunch is not the same as real knowledge. I felt like I didn’t really have any kind of grounding. I was researching pre-American African culture and hitting a wall because I just really didn’t know what particular region to focus on.

V: It’s interesting you used the word “grounding.” Isn’t it all about the grounds, the land? Knowing where you’re from really grounds people. I went to Nigeria a few years ago as you know, but we have to go back in and walk the ground the way you do when you know this is the same dirt that your ancestors lived and worked and walked on. So, I’m thinking family trip to Nigeria and Ghana this Christmas. What do you think?

T: Mom, that would be awesome. I am definitely down.