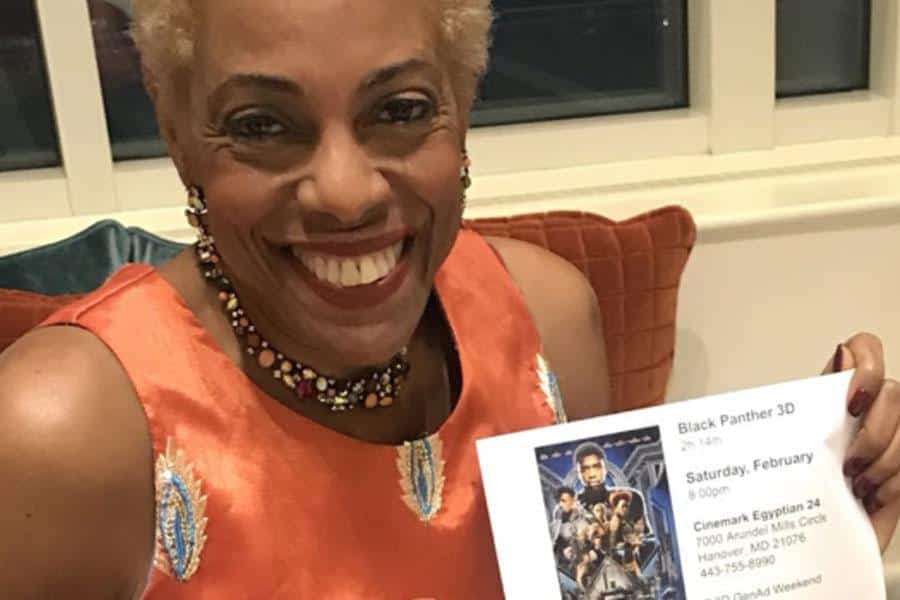 It’s Black History month, and I am definitely in celebration mode. I saw a new documentary on Malcolm X by the Smithsonian Channel. I’m also checking out “hidden figures” in black history like the Forgotten Four, four black football players who integrated the NFL the year before Jackie Robinson did the same in major league baseball, featured in a documentary airing on Hulu. I had no idea they existed! I’m going to a play, The Meeting, which explores a fictional meeting between Malcolm and Martin. And I’m also in the middle of the heartbreaking, eye-opening debut novel Homegoing, about the slave trade in Africa and America, and America’s lasting legacy of slavery, written by Yaa Gyasi, a 28-year-old woman born in Ghana and raised in Alabama.

But the thing I’m most excited about this Black History month is the Marvel movie Black Panther, which comes out on Friday. My son and his girl are coming down from New York to Baltimore to see it with my sister, my nieces and nephews and me. We’ve got our tickets, and we’re pumped!

And we’re not the only ones. It seems that a lot of folks are excited about this uniquely blackish, utopian, action-packed blockbuster of a film. One of my law firm clients has rented out two movie theatres and has over 300 seats reserved, and my church is taking 300 youth aged 13-18 to see the film. Apparently there have already been more ticket presales for Black Panther than any other superhero movie. This is huge!

In the past, it seemed that if a movie was seen as “too black,” it was a problem at the box office, or it only attracted black folks. There have been a few recent exceptions—Hidden Figures, Get Out, and a number of Kevin Hart’s films—but not with this fanfare and not for an ensemble cast where black faces dominate the screen.

This is a movie that’s unapologetically black. It’s even got “black” in the title. And it’s set in Africa—which is as black as you can get—in a fictional nation called Wakanda where black people are in charge. It’s like a cross between Coming To America, Boomerang and Malcolm X, with a little Boys in the Hood mixed in. (Geesh, maybe I shouldn’t be writing this article; I might be tipping the “too black” scale!)

And did you see pictures from the premier? The dress code was “royal attire,” and the guests totally dressed the part. Members of the cast, along with dozens of other black actors and musicians, appeared in outfits that were knock-dead gorgeous and regal, many of them with bold, colorful African influences. It was breathtaking—and it’s got me thinking about wearing my African garb when I see the movie this Saturday night.

What makes this movie so special in my own mind is definitely multi-faceted. The quality of the cast, the director, and the production makes me proud. The actors are black Hollywood royalty, old and new: Angela Bassett, Chadwick Boseman, Sterling Brown, Lupita Nyong’o and Forest Whitaker. There’s also Daniel Kaluyaa, who’s an Oscar nominee for his starring role in Jordan Peele’s Get Out. (And I won’t even talk about the joy Michael B. Jordan brings me, ‘cause I don’t know how to do it without being improper!) There are some gorgeous newcomers too, like Danai Gurira. It’s awesome that she and some of the other actors are actually from Africa. The film also has a black director, Ryan Coogler from Fruitvale Station and Creed.

On a personal level, it’s always great to see people who look like me on film. Of the 17 Marvel superhero movies that have been made, none of them have had a woman or person of color in the title role until now. If you’re not underrepresented in media, you may not know the pride and the excitement that comes from seeing the best of yourself and your culture depicted in a mainstream film—especially when so much money and screen time has been devoted to casting black folks as servants, slaves, and unessentials or as violent and anti-social.

Maybe one of the reasons Black Panther has so many presales is because it is tapping into a whole other market of viewers who would normally forgo the theatre due to its limited and monochromatic themes. There’s a reason so many youth organizations are raising money to bring young black children to see the film, with help from initiatives like #BlackPantherChallenge. I’m hopeful that the fervor for this movie will start a conversation among black youth and other groups about the history of black kings and queens in Africa that rarely gets acknowledged.

But the most exciting aspect of the movie for me is really my hope for what it will mean for people to consider beauty, leadership, and power through the lens and in the hands of black folks in a black nation (the kind that some might think of as a “shithole”). It’s the same feeling many of us got when watching Wonder Woman, and saw excellence and fortitude depicted in a group that’s been stereotyped as weak and dependent. We need these kinds of movies to help us break out of our limited mental models and distorted histories about groups of people, challenge our biases, and reimagine the value different groups bring.

As a cultural innovator, I often advise my clients on how to create policies, practices and cultures that embrace and grow the power of difference. Movies like Black Panther can help leaders to visualize a reality they may find difficult to imagine because they’re so invested, often unknowingly, in the status quo. They can’t see the talent and the opportunities they’re missing when they cling to the old mostly white, mostly western cultural norms.

Even my clients in the entertainment industry still see differences as a threat and a risk. But I remind them that they are the opportunity makers, because they shape so much of how we see the world. When they remove the hurdles for women and people of color, when they allow for diverse storytellers to shape, influence and make new, more complex and authentic narratives, the world expands for us all.

Are you looking forward to the movie? Or have you seen it already? Let me know! And you can be sure I’ll report back on my impressions after I see it. Catch me in a live recap on #AskVernaLive Facebook Live, Fridays at 1pm EST.