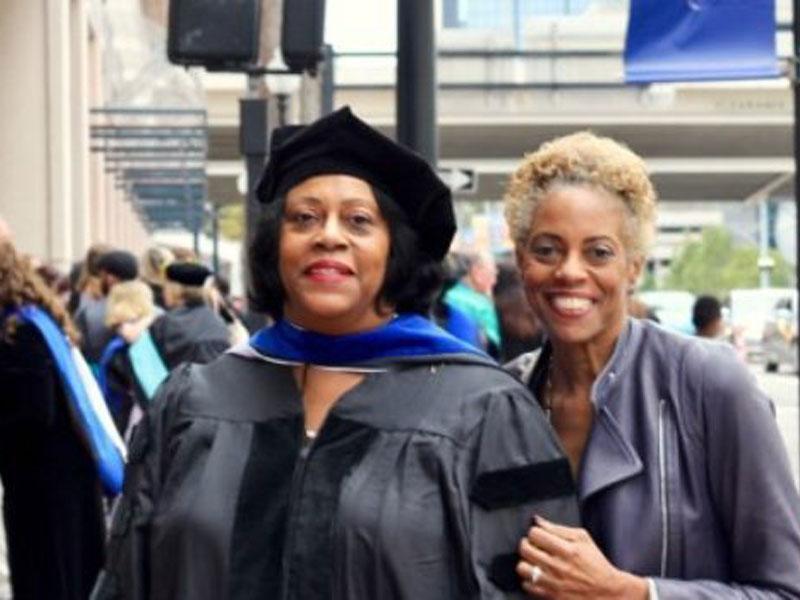 Last week, my sister graduated from her PhD program at Walden University. When I walked into the Tampa Convention Center for the ceremony, along with hundreds of other graduates and their families, I was immediately flooded with emotion. I know, there’s nothing that strange about crying at a graduation ceremony. But there were so many different reasons I felt emotional that day—layers of meaning and significance.

One reason was that I had followed my extraordinary sibling’s entire journey to this triumph: Earning her PhD with honors at almost 60, a grandmother, a mother of three (including a teenager!), a caretaking daughter, and a super sister/friend. She’d mastered her courses quickly, studying through the night and excelling at every step, all while working full time. The dissertation process was a beast—grueling, confusing, discouraging, and lonely, requiring hours and hours of writing, researching and praying, not to mention a lot of money! But she found within herself a determination that humbled me and made me proud. My heart was also full of the pride she brought our family as the first in our lineage, probably on either side, to reach this pinnacle of educational achievement. She’s like our family’s own Georgiana Simpson—the first African-American woman to receive a PhD.

I was emotional on behalf of the other graduates, too. There’s something so powerful about seeing so many people celebrating dreams realized, beliefs confirmed, courage rewarded, confidence heightened. Graduations are a testament to the true meaning of faith: “Now faith is the substance of things hoped for and assurance about what we can not see.” (Hebrews 11:1).

But there was another reason my heart was full: Many of those graduates and their families were people of color—some from the US and some from the other 140 countries represented that day—all boldly striving to educate themselves. When I looked at my sister and the other black graduates and their loved ones in the audience, I was reminded that this was a celebration not only of my own family, but of generations of black and brown people fighting against the odds for educational opportunity, and continuing that fight even now. It felt particularly poignant coming at this time of year, as Black History Month begins.

Education was huge in my family, and that value was passed down to my parents from their parents and their forebears. Many people don’t realize that black Americans come from a long line of believers in the power of education—people with a hunger for learning. There’s a defiant tradition of education in the black community, dating back to America’s founding. One of the most rebellious acts in the time of slavery was for enslaved people to learn to read or to teach another to read. But despite the risk of bodily harm or death, they persisted.

Then there are the amazing examples of black educators that I was taught about in my little black elementary school who aren’t talked about as much in mainstream US History, as well as the better known ones: Booker T. Washington, who founded Tuskegee Institute in 1881, and Mary McCleod Bethune, who founded a school for black women and served as an advisor to President Franklin Roosevelt. I recently watched a documentary on the brilliant Thurgood Marshall, Charles Hamilton Houston, and the NAACP Legal Defense Fund, and how they worked for decades before Brown v. Board of Education to integrate this nation’s schools, including colleges and universities, facing violence and threats along the way. My sister’s graduation was a proud manifestation of all these people’s genius and courage. It was also a reminder that the struggle to ensure quality education for black, brown and poor people is far from over.

A number of my sister’s fellow graduates were from African countries, and I felt a profound connection with these students as well. They’re part of my African American story, representing our link to a great tradition of scholarship: The universities in Timbuktu and Fez, Morocco are among the oldest in the world.

By the end of the ceremony, I thought I had pulled myself together. But then I saw my sister walking out, and instead of the ceremonial “Pomp and Circumstance,” the music was Kool & The Gang’s, Celebration! The graduates who had been quiet and somber a few minutes before started to dance, and I welled up again. And then we were all dancing: mothers and fathers, sons and daughters, sisters, brothers, and friends of all colors, ages, histories and struggles, celebrating both what had been accomplished and what was possible for the future.

I hugged my sister, now Doctor Famane Brown, and later that day the rest of our family—nine of us in all, including her grandchildren ages 9 and 11—arrived to watch the special hooding ceremony for doctoral students. (Meanwhile our mother, who is 87, watched online from Baltimore!) Full of joy and pride, we all cheered loudly as we watched my sister receive her doctoral hood. She may be the first PhD in our family, but seeing her children and grandchildren’s enthusiastic reaction to what she’d achieved, I’m pretty sure she won’t be the last.