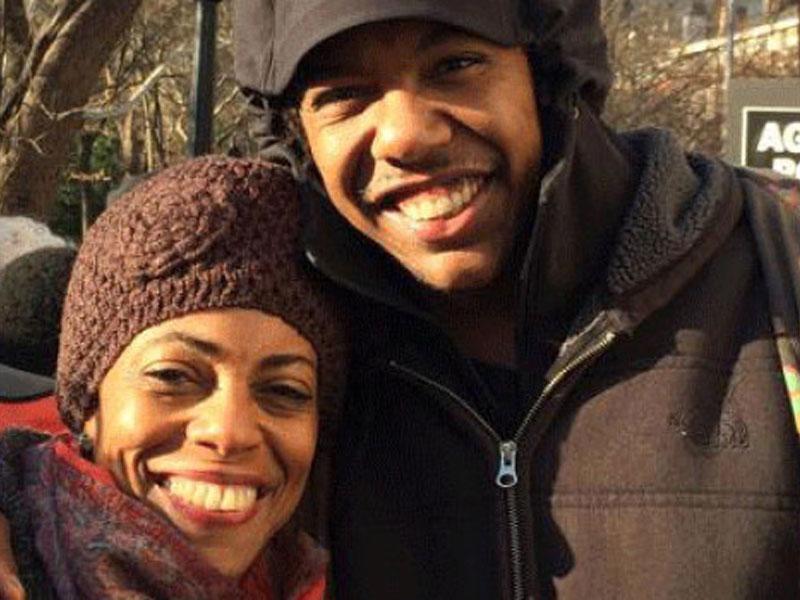 “Black Lives Matter!” While thousands of New Yorkers were doing their holiday shopping on a Saturday afternoon, I found myself on the City’s streets surrounded by a throng of the most diverse young men and women I have ever seen. I later learned that more than 50,000 people gathered peacefully in New York City for the “Justice for All” Millions March. Many other tens of thousands were marching in similar protest in cities across America.

My 27 year old, 6’5’’son, Trés, a musician and poet with a thunderous voice, was towering over me and making sure I was keeping up with the crowd. I’d never experienced him as burgeoning activist until he left my side and boomed (no bull horn needed), “I Can’t Breathe.” And the crowd bellowed, “I Can’t Breathe” back.

I barely noticed the cold, gray day because of the warmth and comfort I felt being surrounded by Asian and Hispanic marchers uttering, “Black Lives Matter!” And then without warning as we turned the corner and merged with other protesters, a white teen-aged boy with curly red hair righteously exclaims , “Tell Me What Democracy Looks Like” and the multi-cultural, multi-ethnic crowd roared back in unison:

The declarations and orderly demonstrations filled my heart with hope. And yet a part of me wonders how long these protests will last? How many slogans, how many hashtags, how many more decades and how long will we have to take to the streets before real change happens?
Initially I was concerned that the hurried shopping, holiday parties and slow news cycle might lull us back into complacency. Now the horrible murders of two New York City police officers – Officers Wenjian Lui and Rafael Ramos – slain by a lone gunman have occurred and the rhetoric against the protests has begun. Mayor de Blasio has made the plea for the protest to stand down. Tensions are high.

Pausing from street protests to show our compassion for these human beings, their families, and fellow officers is an important way to affirm that we are all one, and that all our fates are connected. The murder of these officers, however, makes it even clearer that we have to continue to demand an end to violence and bigotry. We must restore the trust and respect that is necessary to assure safety for everyone. While this tragedy causes us to reflect, we can’t withdraw from meeting together and talking honestly with police about the root of our problems and the grief and loss that so many families will continue to endure if we don’t find the fortitude to transform our criminal justice system.

How can we keep the momentum going? How can we make sure we keep pushing—to sustain the protest against police misconduct and institutional racism while at the same time stand up for the police and officials who are trying to do the right thing? How do we ensure that Michael Brown, Eric Garner, Tamir Rice and countless others didn’t die in vain? What can we all do to make sure that the work that has started continues to create communities where racism and brutality are no longer tolerated?

Just a month ago, in my first ever TEDtalk, I encouraged people to walk toward their biases and implored each of us to say or do something when we see injustice and bias in the world—even when it happens in our own families and with loved ones. So even when the streets are cleared of protestors, you can bring the message of the protests to your holiday table. Here are three ways:

1) Interrupt Bias: You know Uncle Joe is going to say something offensive. He does it every year. In the past you may have just let it go. This year I ask you not to. Instead, ask one simple question: “What do you mean by that Uncle Joe?” By asking this simple question, you interrupt his bias and invite Uncle Joe to consider what he has said. Perhaps your ask will be well-received, but chances are he will be taken aback. He might respond, “What’s wrong with that?” The ensuing conversation might be difficult, but it is important and worth it. By interrupting Uncle Joe’s bias, you make it clear to him and others at the table that his offensive comments are in appropriate.

2) Use “I” Statements: Grandma or your brother-in-law might not realize they are saying racist things. And I’m not saying you should start an anti-racism chant at the table. But there is a way that you can speak your truth in love by using “I” statements.
“I have had a very different experience, Grandma.”
“I am devastated by the killings of those officers, and I also can’t imagine the pain Tamir Rice’s family is feeling this holiday season.”
“I feel upset when I hear you say that, Justin, because I worry about what kind of world our children are growing up in.”

To share our truth we do not need to shame, blame or attack others. That’s easier said than done, I know. But all of us have blind spots, not just some of us. How would you like for someone to bring to your attention that you are promoting/engaging in harmful stereotypes? Let that way be your guide. The important thing is not to be judge and jury, but to offer another view to interrupt the prejudice so that it does not stand unnoticed or unchallenged. To be silent is to be complicit with the bias.

3) Engage the Next Generation: Invite the young folks to speak this holiday. Talking about marginalization, remember the “kids table?” Don’t separate them from the discourse. The holidays are a perfect time to engage the young people in your family in the conversation about our country and race. We can’t afford to maintain their innocence or ignorance when they could be the subject of injustice or a witness to it.

Ask some probing questions:
What has been their experience with people of different races and ethnicities?
What have they heard and what do they think about Ferguson, Eric Garner, Trayvon Martin, Tamir Rice?
What are their beliefs and fears?
How do they feel about the police? Are they friend or foe?
What kind of country do they want and what are they prepared to do to get there?

Share the amazing history of the civil rights and other struggles for justice in our country. And be curious about the vantage point of those who are younger. Young people have been prominent in all major movements for civil rights in our country. They could be our salvation this time as well. They have the freshest take on our country’s dream of equality and what it should look like. “What Does Democracy Look Like?” It starts at our holiday table.

Happy Holidays and Peace To All!

See Vernā’s talk on TED.COM entitled, entitled “How to overcome our biases? Walk boldly toward them.”