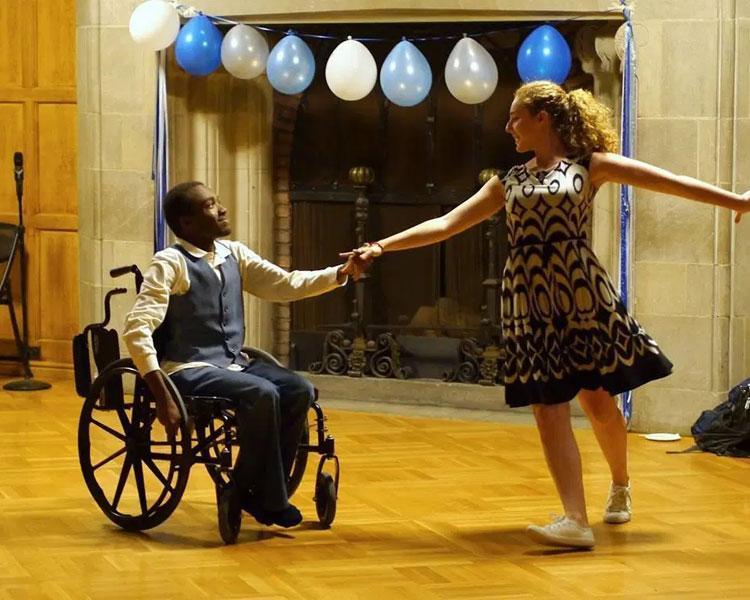 She walked into the classroom, prepared to take her exam, when she noticed the chair behind her desk was not conducive to her scoliosis. Sitting in a chair for long periods of time hurts her back, so she requested a different one. She kept her head down to avoid any unwanted attention, but her classmates began to comment.“I don’t want people to come up and ask anything, and lo and behold I get people coming up and saying ‘Oh, look at you and your special privileges,’” said Nicole Agaronnik ’19. “I’m about to take a test, I don’t need to be disclosing about my disability.”This example of ableism — the discrimination against people with disabilities — does not come as a surprise to many disabled students on campus. According to Student Disability Services, approximately 1,450 students registered as having a disability and/or as needing accommodations due to a disability in the 2015 to 2016 school year.Student Disability Services defines a person with a disability as someone who has a physical or mental impairment that substantially limits one or more major life activities, has a record of such an impairment and is regarded as having such an impairment. For many of these students, ableism is rampant both in and out of the classroom.When asked if he has experienced ableism on campus, Jonathan Goldstein ’17, the three-year president of Cornell Union for Disability Awareness, answered emphatically, “Yes, most definitely.”“Speaking candidly, ableism is something I experience quite frequently,” he said. “I personally receive extended time for exams as one of my accommodations, and I’ve had some faculty who’ve said things like, do you really need that? Or, maybe you’ll get a higher score because you have more time. I’ve had people who’ve said things like, are you trying to ‘game the system’?”But many believe the grip of ableism on society extends far beyond Cornell’s classrooms.

Last year, Cornell participated in an Association of American Universities report called the “Campus Climate Survey on Sexual Assault and Sexual Misconduct.” According to the report, students who reported having a disability have been sexually assaulted at a rate that was more than twice as high as those who did not have a disability.

Though Agaronnik, a CUDA board member, acknowledged that she cannot “speak for all people with disabilities,” she indicated the negative effect of ableism on her and her peers.

“I think that to begin with, a lot of people don’t even know what ableism itself is,” she said. “It impacts people with disabilities as much as racism or sexism impact people of different groups. It’s definitely frustrating that the basic definition doesn’t exist in the minds of people.”

Goldstein noted that ableism is “institutionalized” within the Cornell community.

“Disability is often viewed by most people in society through a medical model, which means you’re looking at disability from the lens of a personal problem,” he said. “The question becomes how do we fix this person? As opposed to, how can we fix society and work to change our perspectives and environments … Many people have never heard the term ableism before.”

Cornell and the Americans with Disabilities Act

There are 10 Americans with Disabilities Act centers around the country, and Cornell houses one of them. This little known fact is “the best kept secret on campus,” said Angela Winfield ’08, law.

“[The centers] serve a lot of private sector companies, a lot of agencies, a lot of individuals in their region, which is New York, New Jersey, Puerto Rico and the U.S. Virgin Islands,” Winfield said.

Known as the Yang-Tan Institute on Employment and Disability, the ADA center, located on the Cornell campus, aims to promote equal opportunity for people with disabilities through federally and state funded projects, according to its website.

Winfield, the former Program Manager for the Northeast ADA Center, is trying to change all of that. As the current director of Inclusion in Workforce Diversity at Cornell, Winfield monitors the University’s employment diversity.

“We have this mission-based goal, any person any study, which is a really nice platitude and it’s what we were founded on,” she said. “How do we actually make sure that we’re living that out in our policies and practices?”

But when benefits are offered, many people with disabilities still do not access them. This deficiency is due to a prevalent reluctance among students and employees to self-identify within the community, according to Winfield and Goldstein.

“A lot of people have asked, ‘why would I self-identify? What’s in it for me?’ I think that’s one of the challenges around disability,” Winfield said. “Once you’re in the workforce, it becomes about, ‘I don’t want people to think I can’t do my job’… They don’t have a good reason for feeling that [having a disability] is valued yet.”

Goldstein also noted the problematic tendency for students with disabilities not to register with SDS, noting that they may decline “because they do not personally require an accommodation,” or because they “don’t feel comfortable with the social stigma of ‘disability identity.’”

Even Goldstein was hesitant to self-identify, saying he originally had no desire to disclose his disability at all.

“Part of what was cathartic for me was recognizing that sharing my experience didn’t need to be a negative thing,” he said. “Nobody should feel that their experience on this campus is isolated in an already competitive environment.”

Agaronnik described her experience of self-identifying as a sort of “coming out.”

Where do we go from here?

So what do diversity, inclusion and accessibility really mean, and how can Cornell progress?

“The inclusion piece, I think, is the harder piece, and that’s the culture work,” Winfield said. Quoting attorney Verna Myers, Winfield added that “Diversity is being invited to the party, inclusion is being asked to dance.”